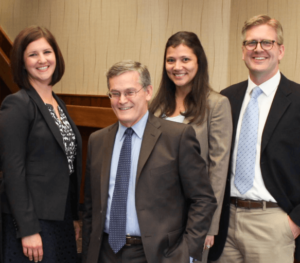 Believing there was a better way, Vic, along with three other former Holland & Knight attorneys, Betsy Gates-Alford, Robert Pickrell, and Marlo Del Percio, opened a boutique firm specializing in government and land use. Government and land use are hyperlocal issues, and the team at Filippini Law Firm LLP has the institutional knowledge, expertise, and experience to create solutions on the ground in Illinois.